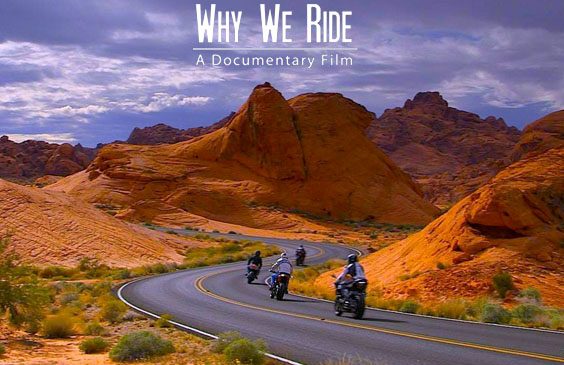 Far too often, motorcycle related movies and documentaries fall flat of real motorcyclists expectations. They are either too Hollywood or lack depth and visual excitement. Such is not the case with Why We Ride by director Bryan H. Carroll.

Why We Ride does an excellent job capturing practically every aspect of this life we love from its humble beginnings with Harley-Davidson and Indian Motorcycle to the early raw days of dirt track racing and its transformation into the infamous Daytona 200. Viewers are also given a glimpse into the blistering fast Bonneville salt flats where world land speed records are challenged by the likes of land-speed record holder and motorcycle drag racer Valerie Thompson. Viewers are also taken on a trip into the rigorous up-hill battle (literally) of hill climb racing to the cafÃ© racer scene and where it all began for a lot of us, the dirt-bike segment.

“Why We Ride served as a history lesson for me than anything else” says enthusiast Adrian [A-boogie] McQueen. “To watch where motorcycling began and see the passion for two wheels pass along through generations was amazing. Going into the theater I never heard of Ed Kretz, but after watching I gained a sense of appreciation for this rich history I’m now a part of” he continued with now found respect.

Even though aspects such as bike nights, stunting, drag-racing and the different cultures that make up our diverse motorcycle community are unfortunately briefly touched upon, you canâ€™t help but to walk away with a sense of honor and respect for all Riders and being a Rider.

It doesnâ€™t matter what kind of Rider you are, independent, club, female, male, street, track, young or older, Why We Ride has raised the bar and will surely make you proud to twist your Throttle.

For showings in your area, check out WhyWeRideFilm.com as well as opportunities to sponsor a screening. DVDs are available for purchase on Amazon and ebay.