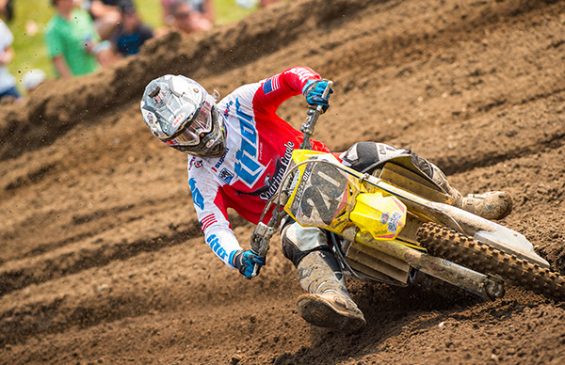 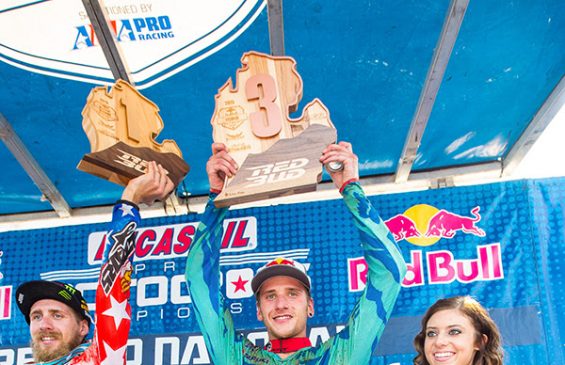 BREA, CA (July 6, 2015) – While Americans were celebrating the nation’s birthday on July 4th, thousands of Michigan area motocross fans reveled in their own unique way by flocking to the annual tradition of the Independence Day race weekend in Buchanan, Michigan – the RedBud AMA Pro Motocross National. As it’s been all summer, Team Suzuki riders figured prominently in the event.
Highlights of this weekend’s action at the RedBud National included:

Roczen Back on the Podium
RCH Suzuki’s Ken Roczen bounced back from a bout of illness that kept the defending series champion off the podium last week and got back on the box at RedBud, scoring third overall with a 3-3. In the first moto, Roczen worked his way forward from a fifth-place start to finish third. The No. 94 grabbed another third-place finish in moto two after starting fourth. He remains second in the standings at the start of the second half of the season.
Roczen was still battling lingering effects of an illness in Saturday’s event, but mentioned that he feels like he is close to being back to full health.

“I was really excited to come to RedBud,” said Roczen, who earned his fourth podium of the season. “It’s a big race for me, the team and the sponsors. I always love going there – it’s one of my favorite tracks. I put in a strong ride in the first moto and got third. In the second moto I had another solid ride. Obviously I want to win, but we had a 3-3, which is O.K. considering the weekend I had at Budds Creek. So we were on the podium. We want to be on the very top. It was a good weekend overall. The fans were amazing. We’re coming into another off weekend. I’m almost complete done with the virus that I’ve had, so I think I’m going to be able to do some good training and get a lot stronger for the upcoming races.”

Tickle Matches His Best of 2015
Broc Tickle matched his best outdoor national finish of 2015 aboard his RCH Suzuki RM-Z450, taking fourth overall at RedBud. In addition to another outstanding overall score, Tickle’s fourth-place result in the first moto marked his best moto finish of 2015 so far. He leaves RedBud in sixth in the series standings.

“The first moto was fun,” Tickle said. “I got up front at the start and kind of stayed in there behind [Weston] Peick. He and I basically paced each other the whole time. I made a pass on him with two laps to go, he passed me right back and then a lapper got in his way and I got by him and ended up fourth. In the second moto I got off to a seventh or eighth-place start and then got passed by a couple of guys on the first lap. I struggled to get going. I started cramping a little bit. This week off will be good for me. Everything is heading in the right direction. I’m going to just keep working and the results will keep coming.”

Baggett’s Off Weekend Still Results in Eighth
Yoshimura Suzuki’s Blake Baggett had what he felt was a bit of an off weekend at RedBud. The 450 class rookie finished eighth overall with a (6-9). While not his strongest result, Baggett was still able to use the agility and power of his Suzuki RM-Z450 to make up ground after suffering tough starts in both motos.

“In moto one I got a little bit sideways off the gate,” he explained. “I came in contact with the rider next to me and didn’t get the greatest drive around the first turn. I started down in about 12th and made it to sixth. I couldn’t work my way any farther forward than that. I didn’t have the greatest flow today.”

Baggett found the going even tougher in moto two. He ended up mired somewhere in the middle of the 40-rider field. He found a way to get back to ninth by the checkered flag. Baggett is fourth in the points going into Millville in two weeks.
“Eighth overall wasn’t the greatest day for us,” Baggett admitted. “I’m looking forward to the weekend off and keep working on my riding being a little bit smoother and a little more precise in some areas, while also letting it hang out in other areas. I’m looking forward to preparing for Millville.”

Kyle Cunningham finished 18th overall (15-38) on his TPJ/Suzuki/Fly Racing Suzuki. Other Suzuki finishers in the 450 class included Kevin Rookstool and Ronnie Stewart. Suzuki RM-Z250 mounted Brandon Scharer and Max Groom made the 250 National at RedBud.
The AMA Pro Motocross Series takes a weekend off before Team Suzuki returns to action in the 2015 Lucas Oil Pro Motocross Championship on July 18 with the La Crescent Wine and Spirits Spring Creek National from Spring Creek MX Park in Millville, Minnesota. It will serve as the eighth stop of the 12-round championship.
Suzuki riders will be on hand to meet and sign posters for the fans on Friday, July 17 at River Valley Powersports, 5327 East Frontage Road NW in Rochester, Minnesota, from 6:00-7:00 pm.