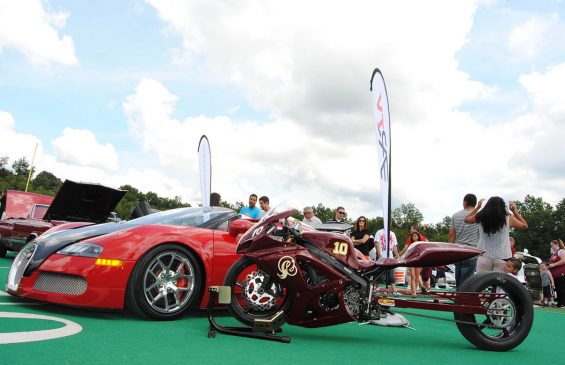 Redskins Park revs up with the 2013 Redskins Rides

With the Redskins summer training camp now taking place in a new state-of-the-art facility in Richmond Virginia, you may think there’s not much excitement going on back at their training park in Ashburn, VA. Well, nothing could be further from the truth, particularly if you’re a car buff. Once a year the team’s camp full throttles with some of the most exotic and attention grabbing vehicles in the Washington, DC metropolitan area for the Redskins Rides car show. Taking time from their busy schedules to meet and greet the fans were players Brian Orakpo, D’Angelo Hall, Alfred Morris, London Fletcher, and Fred Davis to name a few.

This year, Throttle Life and Automotive Rhythms were media partners of Redskins Rides and helped turn up the volume on the dynamic vehicle displays. Given Automotive Rhythms’ stellar reputation within the automotive industry we were able to solidify the super exclusive Bugatti Veyron Grand Sport which was prominently huddled on the show’s 50-yard line. Complementing this beautiful French supercar were two superbly customized motorcycles, the RG3 Suzuki GSX-R grudge bike (arguably one of the fastest on the east coast) owned by Derrick Henderson and a low and sexy, pro-street chopper from Everett “Bay” Morrison. Other show quality bikes included a Michael Jackson Suzuki GSX-R, a Washington Redskins themed Harley-Davidson Road King, a completely custom sunset gold Harley-Davidson Road Glide, a pro-charger infused Harley-Davidson Street Glide and a stealthy blacked-out custom Yamaha R1. The spectrum of cars varied from a Gold Chrome dipped Lamborghini to American muscle cars such as classic Corvettes. During the awards presentation, show host Johnny O from 106.7 made it a point to thank Bugatti Marketing Manager of The Americas, John Hill, for customizing his jet setting schedule to attend Redskins Rides. “When Kimatni Rawlins, President and Publisher of Automotive Rhythms presented me with the opportunity, I was more than happy to attend,” stated Mr. Hill.

With blue skies and seasonable temperatures this was the best Redskins Rides to date with more than 5,000 in attendance. Was this excitement sheer coincidence or the result of engaging with two well-respected, connected, and influential media partners? Whatever the consensus, it was a fabulous show – from the classics to the exotics to the growing number of custom motorcycles all within a family-friendly atmosphere.