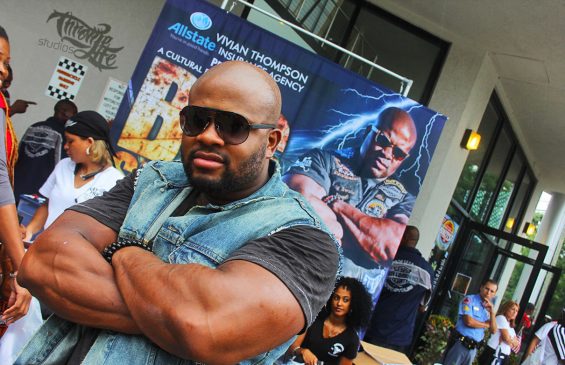 My journey to Raleigh, NC for the Ray Price Harley-Davidson (H-D) Iron Elite celebration was threatened by a 40 mile back up leaving the DMV and then another 10 mile backup in North Carolina. Compounding the problem were gray skies that began to open up with steady rain showers as I drew closer to the event. Although the situation looked bleak and my spirits were now of frustration and disappointment, I pressed on optimistically that I could salvage a minuscule part of the experience.

Once I arrived, I was more than pleasantly surprised and in awe to see the celebration was still in full gear with a huge crowd of riders still on site, to see the street full of vendors and to feel a cool vibe and energy that permeated the air despite the gray skies and showers.

What started out as an effort by the management team at Ray Price H-D to meet the feverishly growing requests for the hard to find H-D Iron Elite (H-D’s outreach efforts targeting the African-American community) patch turned into a phenomenal event consisting of a fashion show, a live band, an Iron Elite exhibit and a bike show that brought out the big guns from Sick Bikez and more. Apparently, Mother Nature didn’t get the message this event was not going to be dampened by her efforts.

On deck for the event was the man on the Iron Elite patch, David “Big Swole” Rose of ATL’s Iron Bred along with his club brothers Invitcus and Bloc. Among those rocking the fashion “dragway” for the H-D fashion show were my sisters in spirit from Shifn Gearz magazine. It was truly an overwhelming sight and feeling to see the hundreds of riders that came out to show support and enjoy the camaraderie. I can only imagine what the turnout would have been like if the weather were more favorable.

With the success of this rain hampered celebration, there has to be a follow up next year. If so, I’m not taking any chances and plan to show the Friday before the celebration.

To the team at Ray Price, much respect and kudos for stepping up and out of the box in support of H-D’s efforts in reaching out to and welcoming all riders.