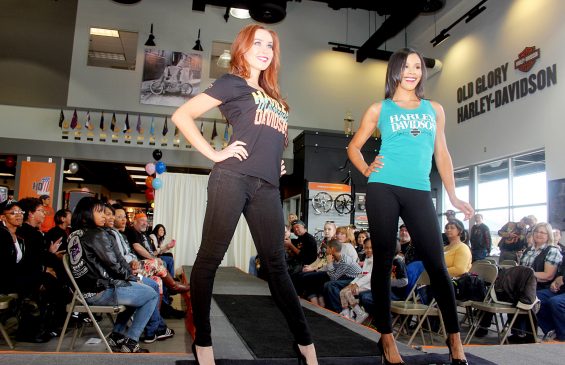 The sound of motorcycles resonating in the air is a definite sign that spring is here. Melodic exhaust notes from Suzukis, Yamahas, Kawasakis and Hondas are all welcoming sounds and sights of the season, but nothing commands attention like the roar of a Harley-Davidson (HD). From the classic design of the Road King to the sleek modern design of the V-ROD, Harley-Davidson is a name known by riders and non-riders alike.

Chances are you’re familiar with HD motorcycles, but do you know about the extensive Harley-Davidson clothing line? Not just for motorcycle enthusiasts, the fashion line – directed by namesake Karen Davidson, Creative Director for General Merchandise – is a stand-alone fashion statement Harley takes very seriously. Throw on a pair of your favorite jeans and a Harley tee and you’ll see what I’m talking about. Feel that? No other motorcycle brand can compete with that “Boss” feeling you get when rocking Harley gear!

To kick off the 2014 spring season, Old Glory Harley-Davidson in Laurel, MD held their annual Spring Fashion Show to exhibit HD’s boundless clothing lines for men, women and little riders-in-training. Replete with a runaway, lights and flashing cameras from all angles, the audience was captivated as they watched the two hour fashion show hawking the latest and greatest Harley-Davidson has to offer.

Hosted by radio personality and Deuces Wild MC member DJ Rico, Old Glory teamed up with customers, employees, local motorcycle clubs as well as the Washington Redskins cheerleaders to showcase Harley’s current clothing line. Each model proudly strutted their stuff down the runway as they rocked leather jackets, jeans, shirts, riding gear and sweat suits bearing the infamous HD label. While the models did their thing on the runway, members of the audience pointed and whispered in delight as if they were attending an event during New York’s Fashion Week.

“The show is a way to say thanks to our customers for their support” said business manager Dave Dawson. “We’re grateful it continues to grow every year primarily from word of mouth within the community and it’s a fun way to engage with our customers while showing off the HD fashion line”.

I commend Old Glory for including customers and members of the community in their annual fashion show. I have no doubt this is one of the reasons the show is so successful and continues to grow. Given the applause and feedback from the audience and after personally witnessing men and women alike donning the HD label at events throughout the country, it’s obvious that Karen Davidson is on the right track with creating a fashion line that not only speaks to HD enthusiasts, but embodies the passion and style of iron horse fashionistas everywhere.

For more on HD’s extensive clothing line visit harley-davidson.com and be sure to check out upcoming events at Old Glory Harley-Davidson.