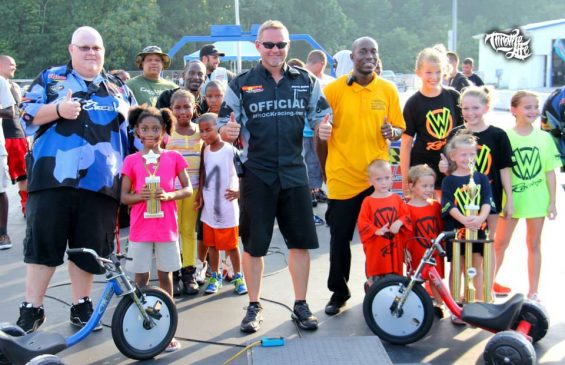 Once again the WPGC Bikefest was hot, literally and figuratively with temperatures flirting with the mid 90s. That didn’t stop the fans from coming out and enjoying one of the biggest events of the year consisting of racing, stunts, a sexy classy bikini from the International Bikini Team and the enduring Paint the 1/4 Pink Breast Cancer Awareness race.

The 3rd Annual Paint The Quarter Pink all female race for breast cancer took place with some of the fastest ladies in motorcycle drag racing including Crystal Dickerson, Kelly Clontz, Dystany Spurlock, Lea Martinez, and Jalesa White to name a few all competing to raise awareness for this cause that has touch so many. After several hotly competed races, Kelly Clontz rode away to victory to claim her title as the 3rd Annual PTQP winner, although with the true winners being those that benefited from the race’s proceeds which went towards Bikers Against Breast Cancer. Hats go off to all the ladies who participated.

Riders throughout the mid-Atlantic came out to compete in some of the hottest drag racing around. Off the track, there was plenty of action going on with the first ever East Coast Stunt Fest featuring the Throttle Life sponsored Longest Endo contest. The WPGC Bike Fest also features a custom bike show. We’re proud to say our family at Myrtle West Custom Cycles took home the Best Kawasaki trophy, not an easy win with so many custom bikes now competing in what is becoming one of the best custom bike shows on the circuit.

It would be remiss of us if we didn’t thank Latina model sensation Lena Chase for coming out for her fans fresh from her photo shoot in Miami. We also want to thank the down-under Australian knockout DJ and model Namea Soundz for always turning up the heat with her tunes, curves and, beauty.