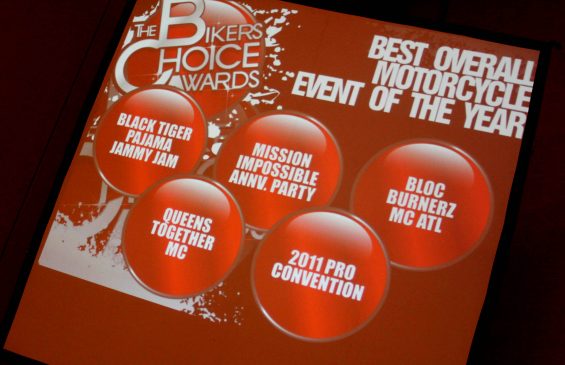 If you’re not familiar with the Bikers Choice Awards, allow us to provide a little background. Not so long ago Nicole “Icey” Williams noticed there were several events in the motorcycle community that recognized Rides and clubs for being the furthest traveled, most represented, or the most the charitable to name a few. However there wasn’t an event that celebrated these accomplishments under one event for the entire community. An event that would recognize independent riders and motorcycle clubs regardless if you rode a sportbike, bagger, or trike, male or female. Thus, with the support of an driven street team, event planners and go-getters such as Syliva “Preciouis” Clark, Trelease “Lil Tyme” Hartfield, Majilio “Jello” Himiya, and Shauvon “V-Boogie” Wright the Bikers Choice Awards (BCA), was created.

As with previous years, the 2012 BCA was full of accolades, moving tributes as well as fun antics with this year’s host K97.5 Radio One personality 1st Lady Shena J and New Jersey’s Bound Squad MC’s T-Eazy keeping the crowd engaged. Adding to the excitement was with a hot performance from none other than Frontline Soldier’s Ginger Bunnz. Notable winners for 2012 were Baltimore Black Tigers for Best Overall Motorcycle Event with their Pamaja Jammy Jam, Most Charitable Co-Ed MC went to the Hit Squad SBC, Hellified of Platinum Dreams won the Hottest Babe on a Cruiser category and Road Captain of the Year went to Pace Man of TRU Ryderz. However, two of the most memorable moments came from two visible personalities in our community, Ruff Ryders’ DJ Storm and Motorcycle Drag Race World Champion Rickey Gadson. DJ Storm truly spoke from the heart during his acceptance speech for the “Best Overall MC Event DJ” category. “It’s not about me,” Storm said. “I enjoy the power of music and enjoy knowing that what I do, what I play may help to lift someone’s spirits regardless of what kind of day they’re having. If the music makes you smile, I’ve done my job.” he continued with humility and grace.

During Rickey Gadson’s speech for winning “Track Racer of the Year”, he sincerely thanked those that voted for him, but also took time in recognizing the BCA event itself. “This event, the Bikers Choice Awards is our BET Awards show,” Rickey said enthusiastically. “It’s an opportunity for us to support, recognize and congratulate everyone in our community for their charitable efforts, personal accomplishments as well as the fun and sexy categories. Everyone needs to be here.” he continued.

Our world reaches so many charities and includes some amazing individuals. From the MCs to independents riders, the BCAs strives to salute all that is good within our community. Throttle Life looks forward to this unifying event for many years to come.