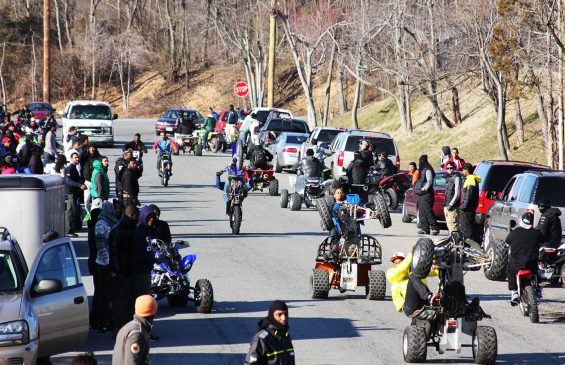 Dirtbikes and ATV’s are an integral part of the world of recreational vehicles, often equated to motocross arenas and the back woods. Until now, thanks to the “Bike Life” movement.

The Bike Life movement offers an interesting twist to what these off road pounders are normally used for. In major cities as Philly, New York and Baltimore, it’s not unusual to see these bikes in packs performing eye popping stunts on the city streets with the level of talent you’d expect to see on a pro level.

Given the unorthodox uses these riders find for their knobby-tired toys, organized gatherings are kept quiet within a trusted network. Receiving the call from my man Dee of the Wheelie Kingz with news of a major Bike Life gathering going down in DC, I sprung to my feet quicker than Richard Sherman shutting down Michael Crabtree. When I say major, I mean MAJOR. Riders drove in from Philly, New Jersey, New York, Baltimore and Virginia….deep. Each rider showed off their latest skills while of course doing a little trash talking just to keep things interesting all in the spirit of friendly competition. It was actually inspiring to see riders and spectators from different backgrounds and cities in support of one another. Speaking of the spectators, as they lined both sides of the strip they were highly entertained by these rogue daredevils with their cellphones in hand to capture this grassroots display of pure natural raw talent.

The Bike Life movement has picked up during the past couple of years given the visibility from celebrity riders as Meek Mills, A$AP TyY, Chino MMG, Scaff Beezy and a host of others putting Bike Life elements in their videos, lyrics and endorsements. Major sponsors as Young & Reckless, Ethika, Monster Energy and Go Pro also recognize the popularity of this movement as well as the natural talent, commitment and passion these riders posses for their craft. Movie director Lotfy Nathan was so intrigued by this movement, he dedicated three years of his life compiling interviews and footage for his documentary “12 O’Clock Boys” with a focus on dirt-bike riders in Baltimore, MD. Don’t for a minute think these riders are only skilled with ATV’s and dirt-bikes. Most own sportbikes and can easily perform at the same level of those household stunter names.

There is, however a strong degree of controversy that inherently surrounds the Bike Life movement. These riders do not live in areas where there is plenty of off road space, instead abandoned streets, freight yards and warehouse lots are their arenas and back woods and often times spilling over into public roads where their vehicles of choice are not street legal warranting attention from law enforcement. Police chases are limited out of concern for public safety. Yet, what can these cities do to provide these talented riders the environment needed to develop and showcase their talents while ensuring the peace and safety of residents? This is a topic that will sure to be touched on in later articles.

The DMV is well on its way as being recognized as a strong region with talented riders that not only embrace, but are creating this Bike Life movement and Throttle Life will be there.