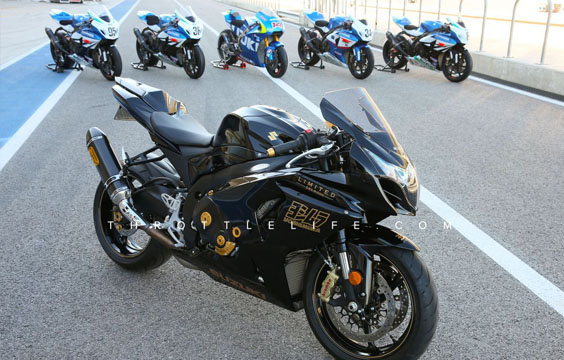 Suzuki GSX-R: Street Ready, Track Proven with the Suzuki MotoGP Team at the Circuit of the Americas

The Suzuki GSX-R has always been about race-bred performance for the street. With its recent test at the Circuit Of The Americas (COTA) in Austin, Texas, Suzuki reinforced that message by showcasing the 2014 Suzuki GSX-R1000 sportbikes (including the above pictured Yoshimura-Limited-Edition model) alongside the Suzuki GSX-R race bikes that compete on national and international circuits.

Following round 2 of the MotoGP race series held at COTA, April 13, Suzuki held a track test for the Yoshimura Suzuki Factory Racing team and its GSX-R1000 fleet competing in the AMA Pro Superbike series, as well as the Suzuki MotoGP racing team as it develops its all-new race bike for the elite international series. Built around an inline four-cylinder powerplant, like that in the Suzuki GSX-R, the new MotoGP race machine will help Suzuki promote its proven “Own The Racetrack” message worldwide.

The Suzuki MotoGP bike is scheduled to enter the 2015 race schedule. Meanwhile, Schwantz’s test time on the GSX-R1000 is more than an photo op; he’s preparing to compete in July’s Suzuka 8 Hour endurance race in Japan, riding for the Yoshimura Legends team along with racer Satoshi Tsujimoto, former Japanese Superbike Champion.

“The 2014 8 Hours of Suzuka is going to be a special weekend. Not only will we celebrate the 60th anniversary of Yoshimura, and the company that Pops built, but we’ll commemorate that I will once again be racing with my 1986 Yoshimura teammate Satoshi Tsujimoto,” said Kevin Schwantz. “To be part of our Yoshimura Legends team for the 8 Hour event at the Suzuka Circuit will be a once-in-a-lifetime experience.”

The Yoshimura Suzuki Factory Racing Team joined Schwantz on the COTA circuit during this test, and Hayden recorded his fastest lap time of the day while chasing Schwantz.

“This test session allowed us to observe some of Suzuki’s finest racers and race machines on a stunning track,” said Steve Bortolamedi, Communications Manager for Suzuki Motor of America, Inc. “To position the MotoGP bike, plus the Yoshimura Suzuki Factory Racing GSX-Rs alongside showroom stock Suzuki GSX-R1000s reinforced that ‘Own the Racetrack’ is more than a slogan.”

Suzuki GSX-Rs have won more AMA Superbike championships than any other brand of sportbike. The 2014 Suzuki GSX-R1000 can be seen at Suzuki dealers nationwide, along with the GSX-R600 and GSX-R750, the original GSX-R sportbike.