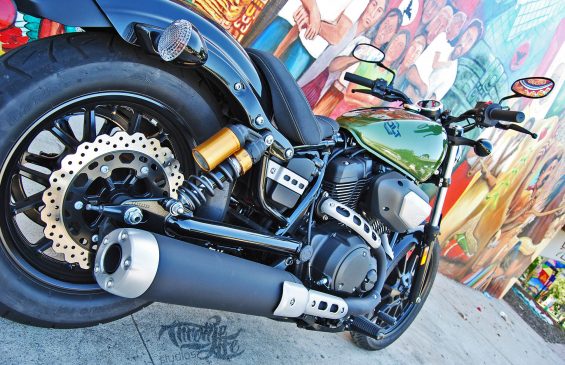 With renewed retro styling taking place throughout the automotive industry, Star Motorcycles decided it was high time to hit the market with their own retro player, the Bolt.

Before diving into the Bolt, let me clear any potential confusion with branding. Star Motorcycles falls under the Yamaha Motorsorts umbrella. Unlike other manufactures that offer sportbikes and cruisers under the same name sake, Yamaha is strategically building their Star Motorcycles brand to better target the diverse cruiser market with the Bolt aptly positioned within their arsenal of offerings.

Weighting in at 540 lbs, the Bolt pays homage to the old school bobber way of life with its intentional lack of chrome, contrast seat stitching, a shorty muffler, black spoke wheels, and dirt track style handlebars all working in accord for a raw hard core look and feel. Available in two models, the Bolt and Bolt R Spec, with the R Spec rocking remote-reservoir shocks, a slick faux suede seat with colored stitching, and available in R Spec only Camo Green or Matte Gray with contrasting badging.

The bustling city of downtown San Diego served as my backdrop to evaluate this new school bobber. Serving as our kick-stands up point of departure was the iconic Hard Rock Hotel which was more than fitting as both Hard Rock and Bolt embody a spirit of rebellious freedom. Navigating through city traffic or bolting down the highway to Coronado Island, the bad boy Bolt provides enough torque to effortlessly get around thanks to the fuel-injected, 58-cubic-inch (950cc),belt-driven 4-valve air-cooled V-Twin with a 2 into 1 exhaust that bellows a deep sound for a stock system. The 3.2 gallon fuel tank allowed for more than enough seat time between fill as I bolted from the Midway Aircraft Carrier Museum to Graffiti Park to the San Diego Air and Space Museum, back to Coronado Island and eventually back to the Hard Rock with more miles still left in the tank.

Bobber enthusiast and purist may take issue with some of the Bolt’s modern day refinements as the chrome digital gauge rather than an old school analog gauge, myself initially included. However, as I was ripping through the streets of San Diego, I began to quickly appreciate the ability to easily access my trip info, time, and fuel via the right thumb control button. This new school feature is sure to appeal to today’s generation of gadget dependent riders. Although not as easy to toss about as the smaller Harley-Davidson Forty Eight, the Bolt holds its own with a comfortable nimble ride and is far more forgiving when confronted with road seams, pavement cracks and other annoying road conditions we’d rather avoid.

It’s almost unfair to compare any Japanese or American bobber (or bagger for that matter) to those created under the Orange and Black shield which has been ingrained into our subconscious with a cool lifestyle appeal that extends beyond the motorcycle community. And yes, it is true you can’t buy coolness, however with the Bolt’s modest MSRP of $7,990 and $8,290 for the R Spec edition, coolness is only a twist of the wrist away for this nimble street prowler.