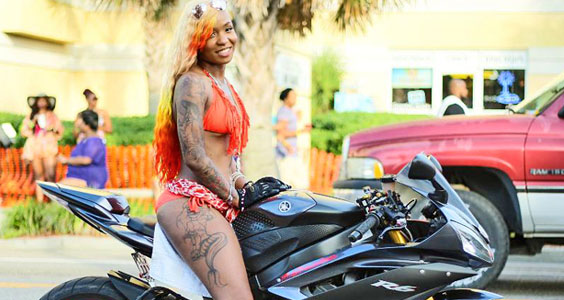 Lia, better known as Princess Lia hails from New York and is immediately making her presence known on the motorcycle scene. Sit back and enjoy as we sit down with this lovely Throttleâ€™ista to discuss her own Throttle Life.

How long have you been riding? This is my first season out on 2s

What sparked your interest in riding? I’ve always admired them from the window in my papa’s truck. Never really imagined that would be me one day but hey it is. Lol

Admiring bikes is one thing, but going out and getting one is something else. At what point did you say “Enough talk, I am buying a bike”. I’ve been looking at bikes (daydreaming) for almost a year. After months of saving, I found my 1st bike, a 2007 Yamaha YZF 600 on Craigs List for a great price and went for it. Unfortunately after a few weeks I discovered problems with the bike and had to let it go. It was all good because that bike didn’t really suit my personality and style, so 3 weeks later I purchased a bikes that better reflect who I am, style, speed and physique wise.

So what do you ride? A black and red 2007 precision-tuned Yamaha YZF R6

Your most memorable ride(s): I have a few memorable moments so far. The first being April 3rd, 2014 my 1st ride. I was scared as hell but in less than a minute, I was beaming with pride saying to myself, “I did it” Then April 9th, 2014 my 1st ride with my #1 supporter. It felt great to show him I got this! Finally, there is BikeWeek2014 Myrtle Beach. This was my first real ride on the highway dipping in and out of traffic, being about that Bike Life and I loved it!

Being a fairly new rider, how did it feel riding in one of the largest bike events in the country? Oh my goodness, it was scary but great. I was nervous thinking what if I don’t stop in time or what if I stall out, which I did twice. However, my mentor and best friend who has plenty of road and real world riding experience was out there with me to help guide and teach, so I followed whatever he did.

Background/Occupation/Hobbies: I’m Trinidadian. Currently I work for a hair company and am a freelance hairstylist. As far as hobbies, I love doing hair, tattoos, writing, riding and traveling.

Females are quickly rising up in what is largely considered to be a male dominated sport in all facets of the game. There are the likes of Dystany Spurlock quickly rising through the ranks and our very own Crystal Dickerson taking over the drag racing scene. On the stunt scene is Christina Billings and Robyn Diamond making noise. Then we have Ana Carrasco and Elena Rosell making their way up the ranks in road racing with their eyes on MotoGP. Outside of street riding, do you ever envision yourself entering into one of these parts of the motorcycle industry?

Let me start off by saying I’m a HUGE Crystal Dickerson fan! Besides that, I would love to become a stunt girl. I have the drive, determination and athleticism that stunting looks to require. I may not get into the full stunt action this season, but I will definitely learn how to pop a wheelie by the end of this summer, with the right people showing me the way of course.

Any advice for new riders? Don’t try to keep up or be down with the crowd. Ride YOUR ride and don’t get caught up riding beyond yours skills.