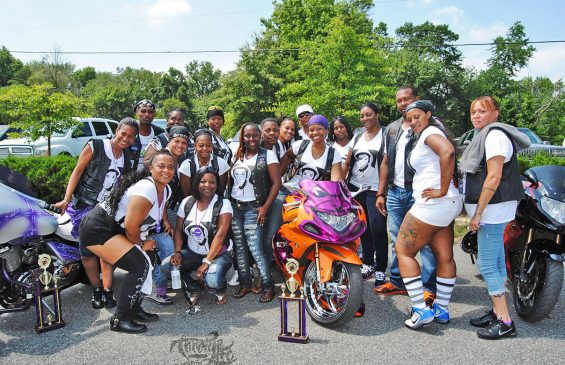 We had the fortune of celebrating with Platinum Dreams MC’s during their 10th Anniversary. This milestone celebration kicked off with a Blackout Networking party held at the Sons of Solomon Temple with DJ Supa Cool rocking the crowd along with Platinum Dreams MC’s own Sunnie mc’ing the hell out of the night with a level of energy and zest only she can bring. Saturday’s charity ride which supported the Firefighters Burn Camp rolled directly into Old Glory Harley Davidson for Platinum Dreams MC’s Block Party with a custom bike show, good eats, music by the Vybe Band, and scandalous fun with a male and female hard body contest that had some of ladies pulling out their dollar bills when the fellas took to the stage.

Saturday’s grand finale, the Denim and White Party (with DJ EZZY and photographer extraordinaire JMD of MyEasyPhoto) welcomed more than 120 clubs (motorcycle and social) that came out to support these phenomenal women in their 10 years of selfless charity and community service while remaining true to what they do, and that’s ride. From Atlanta to the Carolinas to New York and beyond, these ladies are always on the move putting in work as well as miles on their bikes. As President Storm/Hellified said during a recent interview on 2 Wheel Life Radio, if we’re attending an event, we’re on 2s.

Congratulations again to Platinum Dreams MC on an amazing milestone and thanks for allowing us to be part of such a memorable weekend!