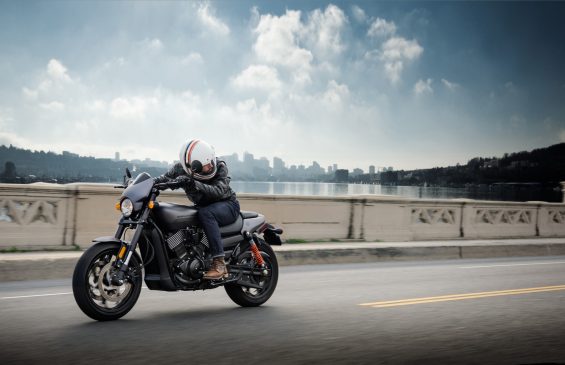 “The Street Rod will put the thrill in any urban commute,” said Mathew Weber, Harley-Davidson Chief Engineer for the Street Rod. “We’ve paired the potent new High Output Revolution X 750 engine with a revised chassis and up-rated suspension components to make the Street Rod quick, light-handling and easy to ride.”

The Street Rod backs up its performance with a liberal dose of Harley-Davidson Dark Custom styling.
“We made this new bike look tough and aggressive,” said Harley-Davidson Lead Designer Chetan Shedjale. “This aligns with the environment our riders will experience this motorcycle in.  The inverted, black-anodized forks and triple clamps along with a new speed screen combine to add visual mass to the Street Rod front end. The increased ground clearance and new 17-inch wheels give the Street Rod an intimidating stance. Finally, a supercharger-inspired air intake and the deeper growl of the exhaust note draw attention to the High Output Revolution X engine.”

The High Output Revolution X 750 engine produces 18 percent more horsepower and 8 percent more torque than the standard Revolution X 750 engine (U.S. and Canada markets only). The new single overhead-cam V-Twin engine features a larger air box, a new dual-throat throttle body, revised four-valve cylinder heads and high-lift camshafts, and a higher-volume muffler. The compression ratio is bumped from 11.0:1 to 12.0:1, and the engine redline is increased from 8,000 to 9,000 rpm.

“We’ve improved air flow and then tuned this new engine to maximize mid-range torque,” said Weber. “It really delivers a punch between 3,000 and 5,000 rpm, power you can always feel and use in real-world riding situations. Liquid cooling helps maintain that performance and rider comfort in stop-and-go urban traffic.”

“The Street Rod is the most nimble motorcycle in the current Harley-Davidson line-up,” said Weber. “Tires, wheels, suspension and frame geometry are engineered to work together and deliver handling that’s light and precise at all speeds.”

A new seat shape is designed to fit the rider’s contour, and seat height is raised by 3.7 inches, to 29.4 inches, to enhance the rider’s view forward over traffic. A flat, drag-style handlebar puts the rider in a fist-forward posture on the bike. The Street Rod also features new forged foot controls and aluminum foot pegs that are positioned for a comfortable seating position that also makes it easy for riders to get feet down to the ground at stops.