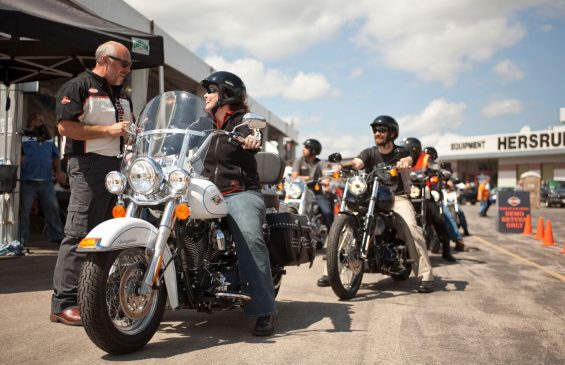 Harley-Davidson is moving to the heart of the Laconia Motorcycle Week® action with a new Weirs Beach venue that will be open for the duration of The World’s Oldest Motorcycle Rally, June 10-18, in scenic New Hampshire.

For the first time in years, all Harley-Davidson exhibits, events and free demo rides on new Harley-Davidson® motorcycles will be conveniently located directly across the street from the entrance to the drive-in across from the Weirs Beach landmark sign on Endicott Street North.

“Since 1918, the annual run to Laconia has been a defining event for riders in the Northeast,” said Bill Davidson, Vice President of the Harley-Davidson Museum® and great-grandson of Harley-Davidson co-founder William A. Davidson.”As this historic gathering of riders approaches its centennial celebration, Harley-Davidson has teamed with Laconia Mayor Ed Engler, local businessman Al Mitchell and Laconia Harley-Davidson owner Anne Deli to secure a fabulous new location near the lake for Harley Headquarters.”

See It/Try It/Buy It: Test out new Harley-Davidson helmets and riding gear when you demo-ride a bike. Laconia Harley-Davidson will offer a selection of new Genuine MotorClothes for purchase on site.