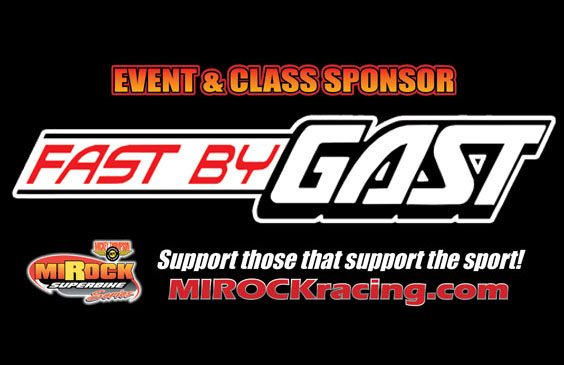 Fast by Gast has renewed their 2014 event sponsorship of the Spring Nationals, Summer Nationals, and Fall Nationals at MIR for the 13th straight year. Fast by Gast is also the Pro E.T. class sponsor, which is the biggest class in MIROCK. Fast by Gast still continues to show their support for MIROCK and its racers and is one of the longest running sponsors in our series.

“We can always count on Paul Gast and the Fast by Gast staff at MIROCK. They are here to support the Pro and Sportsman racers in our series and without the support of Fast by Gast, MIROCK would not be what it is today.” stated by Jason Miller, MIROCK promoter.

FBG president Paul Gast says, “Fast by Gast is pleased to be back again year after year as always. FBG has been a series, race, and class sponsor in the sport of motorcycle drag racing since 1973 and still supports its racers today! I believe what goes around, comes around. Maryland is one of our better sales states and we thank the racers for their business. Good luck this year and we will see you at the track!”

About Fast by Gast: Fast by Gast specializes in motorcycle drag race parts and services. Parts like FBG Lectron, Mickey Thompson, APE, MTC and much more. Services like blocks, heads, and transmissions. Contact FBG by email at fbg1@aol.com, by phone at 800-866-3880 or visit fastbygast.com

The next event for the Mickey Thompson Tires MIROCK Superbike Series will be the Adams Performance Spring Bike Open at Rockingham Dragway on March 21-23, 2014.

Remember… Support Those That Support Your Sport!