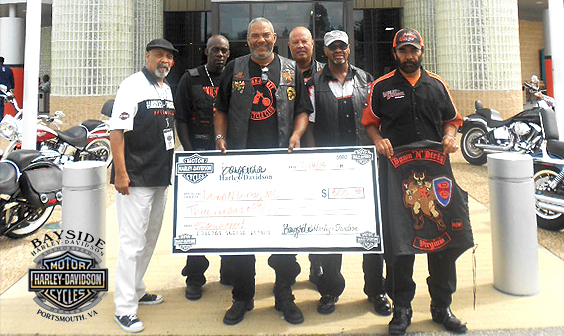 For those not familiar with the Iron Elite moniker, this is Harley-Davidson’s outreach program recognizing and celebrating the heritage and contributions African-American Riders have had on the motorcycle community.

It’s typical to see Iron Elite celebrations at dealerships throughout the U.S., however, Bayside Harley-Davidson (HD) in Portsmouth, VA decided to do something a bit different. In addition to their Iron Elite heritage celebration, Bayside HD added a “Ride Your History” Iron Elite Motorcycle Club essay contest. The purpose of the essay was to engage MC’s in describing how their motorcycle club positively affected the community’s understanding of African-American Riders from past to present.

Beyond the history with the heritage of African-American riders, the essay also superbly described DND’s involvement supporting the community leading by example as positive role models who function with responsibility and accountability in an effort to erase the gang stereotypical image of motorcyclist.

“We are about establishing brotherhood and not trying to be a hood. We don’t shut our doors to anyone, yet we hold control of them. Help is help no matter whom needs it in good faith”

Just as important, the essay also accurately touched on the value and importance African-American Riders have on HDs bottom line.