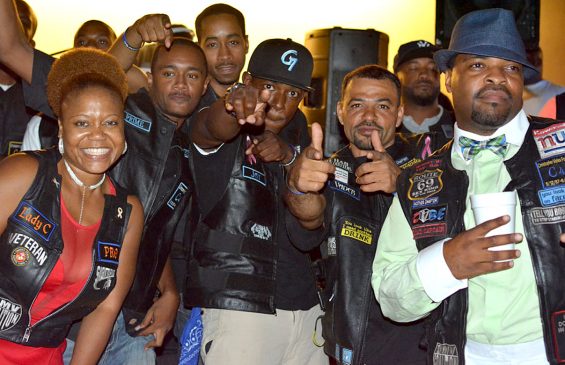 A night out with the Game 7 Riderz motorcycle club

I had the pleasure of attending one of the nicest motorcycle club events I’ve experienced in quite a while, Game 7 (G7) Riderz 8th Anniversary held at the upscale Hyatt Regency in Crystal City, VA.

There was a sea of motorcycles in the hotel parking as Riders throughout the DMV and beyond were all a’buzz as they knew something special happening inside consisting of great food, fun and dancing.

Sportbikes, Cruisers, Baggers, and customs continued to file in minute by minute for a night of DMV G7 love. Although I wasn’t on 2s for the party, I still fit in stylishly thanks to my family with Automotive Rhythms and their long-term 2015 Kia K900.

Game 7 Ryderz made it no secret they intended to set the bar high for motorcycle club events. Having listened to ideas and complaints from the community about the usual motorcycle club parties, they were steadfast and determined to be different from the norm. The food table was complete with sliders, wraps, veggie trays, chips, crackers and deserts. The ballroom inside the Hyatt was decked out with illuminating lights, candles at each table, a picture booth and a full bar.

In traditional motorcycle club fashion, trophies were awarded for various categories with the Bloc Burnaz MC, Smokin Curvz MC and the Wheelie Kingz MC walking away as winners with one of the coolest trophies I’ve seen, a replica motorcycle helmet.

The awards presentation was followed by a moment of silence for all of our fallen riders with throttle hands proudly held high extending to our beloved fallen.

After the final Throttle Hands Up remarks were made, the DJ turned the music up and everyone began to show out.

If G7’s anniversary party is any indication of ushering in a new day for anniversaries and parties, I can only look forward to what’s to come.